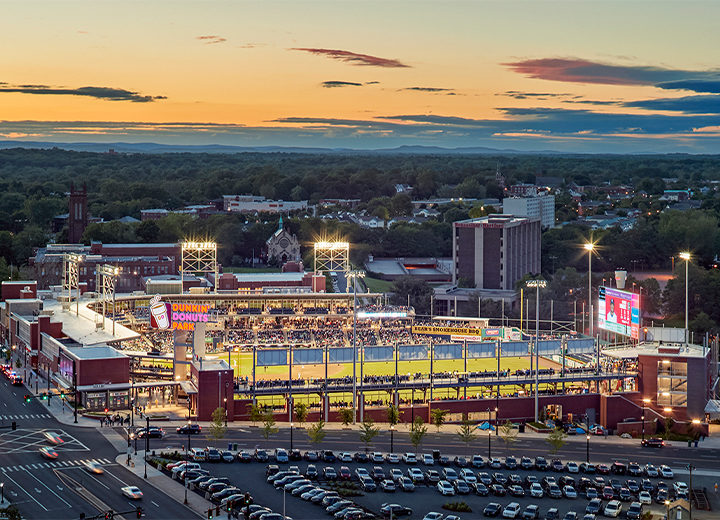 Dunkin’ Donuts Park, home of the Colorado Rockies’ Eastern League affiliate Hartford Yard Goats, has been awarded BaseballParks.com’s “Ballpark of the Year”. The award was announced in the August 9th edition of USA TODAY Sports Weekly by Joe Mock, webmaster and founder of BaseballParks.com and frequent contributor to USA TODAY.

This prestigious honor has been awarded to new or substantially renovated ballparks for the last 18 years, and this year in particular featured formidable competition. Dunkin’ Donuts Park was selected from an all-star cast of facilities including SunTrust Park, the new home of the Atlanta Braves, and The Ballpark of the Palm Beaches, the spring training home of the Houston Astros and Washington Nationals.

Jonathan Cole, founding principal of Kansas City, MO-based Pendulum, was Architect of Record for Dunkin’ Donuts Park. He was joined by key members of the design team including Peter Newman, principal of Newman Architects and The S/L/A/M Collaborative’s Rick Bouchard, Chris Sziabowski, and Derek Czenczelewski on the pregame announcement with Joe Mock on the Yard Goats’ radio broadcast. 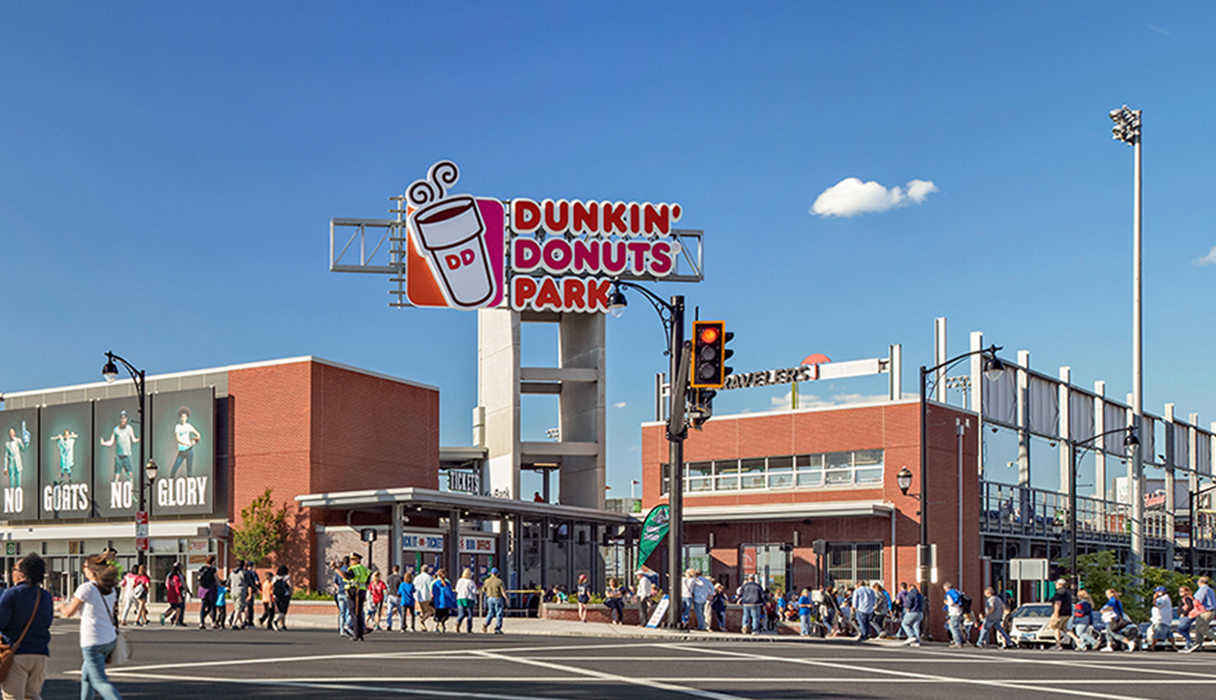 “As Architects and designers, we work diligently to make positive contributions to the built environment” said Cole. "When our work is recognized as being significant in the sports marketplace, in the local community, and nationally by an institution like BaseballParks.com, it is incredibly meaningful. Joe Mock has visited 349 ballparks and counting, so when he and his distinguished panel say a ballpark is good, it carries a lot of weight. We are deeply appreciative of this honor. It’s something we’ll never forget. It was even more special that we were able to be present with the team when it was announced.”“

Joe Mock added “I actually visited the ballpark while it was still under construction. I could tell immediately that it was going to be something special. When I came back to check out the finished product, I was blown away. Not only is it supremely fun to attend a Yard Goats game, the design of the park itself is spectacular. It has the intimacy of small Minor League park, while providing all the amenities of a big-league stadium. From the YG Club behind home plate to the Budweiser Sky Bar high above center field, every inch of Dunkin’ Donuts Park is well-thought-out and expertly designed. This really sets the bar for any Minor League park to be built in the future.”

“The design of Dunkin’ Donuts Park is timeless, a generous mix of the baseball nostalgia, that people love coupled with forward thinking amenities that offer our fans a big-league experience in a very compact footprint,” added Josh Solomon, owner of the Yard Goats. “The fact that the ballpark is creating the excitement that we hoped it would with the fans, which will lead to further transformation of the surrounding neighborhoods, is proof that the city of Hartford picked the right design team for the job.”

“Dunkin’ Donuts Park is a spectacular ballpark that combines the intimate, family-friendly feel of Minor League ball with the architectural quality of a big-league park,” according to Hartford’s Mayor Luke Bronin. “That’s one of the reasons Yard Goats games are selling out week after week and bringing thousands of fans and families to the downtown, which really adds to the City’s energy. It’s an honor to have BaseballParks.com recognize that the result truly stands out among parks across the country, including several Major League facilities.”

Want to get in touch?