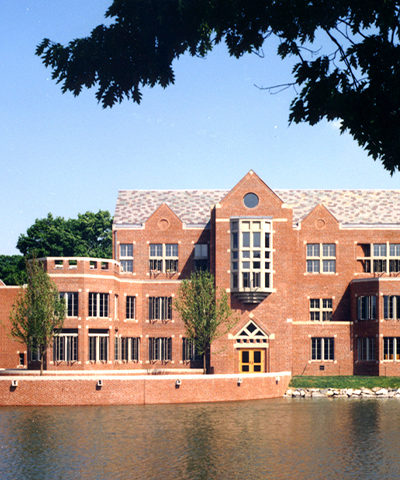 Newman designed an addition to and adaptive reuse of the University’s 1934 Squash Building designed by McKim Mead and White Architects. The new project provides faculty office, meeting space, libraries, classrooms, and seminar rooms for The College of Letters, Art History, and the Career Resource Center. The high ceilings in the Squash Building are well suited for teaching spaces and libraries. They also allowed the introduction of mezzanines for office and support uses. The addition draws from the architecture of “College Row” in massing, alignments, and materials while using contemporary languages of craft to articulate the exterior facade.

Our task was to renovate two unused gymnasia into a new Arts and Humanities Wing for the Taft School and visually unite it with surrounding buildings, including one four-story collegiate Gothic building designed by the architects Cram, Goodhue and Ferguson, and later enhanced by James Gamble Rogers. Loosely grouped around a pond, the buildings lacked focus. Our transformation made the pond the focal point of a new campus center, anchoring the surrounding architecture.

We utilized forms and details that derive from the Gothic vocabulary of the surrounding buildings, including new gabled stair towers marking the entries, matching water-struck brick, a gabled slate roof with blind dormers and windows with cast stone details and cruciform mullions. An octagonal corner tower is now the hub of the student union’s brick paved terrace café.

The volume inside the older of the former gyms provided high spaces for the 200-seat experimental black box theater and a dance studio, while volume in the newer gym allowed for construction of an upper level. The Wing provides new educational and cultural spaces including classrooms, seminar rooms, faculty offices, visual arts studios, music rooms, and film studios.