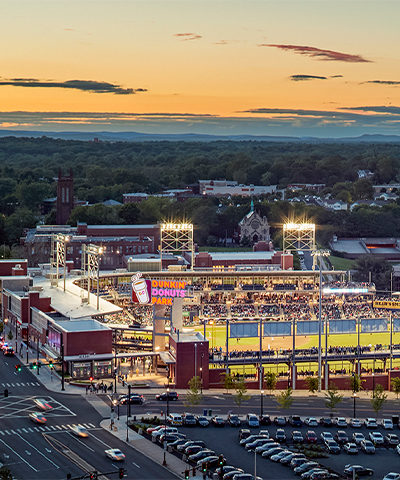 Dunkin Donuts Park is a successful example that a minor-league ballpark can create a people place that enhances city life and catalyzes urban revitalization. Recognized by Ballpark Digest as Best AA Ballpark in America, the venue has received enthusiastic community response, not only for the game but for its ability to host many other special and community events.

As Hartford sought a home for its new AA team, The Hartford Yard Goats, it also wanted a response to community recreational needs, with a bigger vision of encouraging redevelopment of a vacant district bordering its downtown area. The resulting 6,121-seat facility, sited at a highly visible location and transit confluence at the northern edge of the city’s downtown, achieves those goals and more, creating a vibrant destination and gathering place that draws crowds and welcomes its diverse community. The park’s human-scale, open perimeter sits comfortably in its city block like urban ballparks of old, and it bridges a nearby neighborhood. Inside, a variety of spaces encourage social and corporate gatherings, while the low perimeter features the city as back drop. This ballpark’s success in a time when minor-league parks struggle proves the power of this model. It contributes to urban street life, rather than overwhelming it. It is the first phase of a planned redevelopment of the Downtown North Hartford (DoNo) District.